Will Your Training Save You? (part 1) 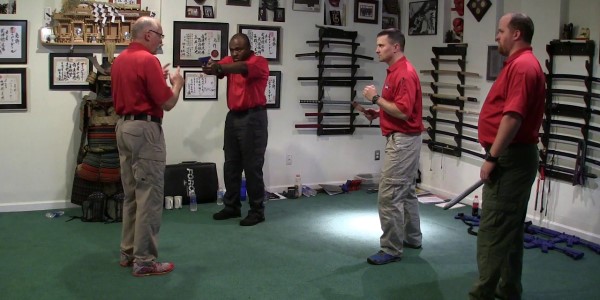 When it really counts, will your training be there for you? When your life or those of others is on the line, will your training come through? Will you win the day or will you realize tragically that it proved inadequate to successfully deal with a violent situation? In my opinion this is a question we should ALL ask ourselves, whether you are in law enforcement, the military, are a firefighter, an EMT, a serious martial artist or an average citizen. 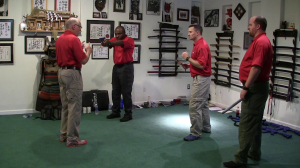 Why? Because I believe the likelihood each of us will confront violence sometime in our lives is trending upward. I also believe the violence we will face will be at a time and in a place we least expect it. Remember the horrific combination car bombing-mass shooting attacks in Oslo, Norway (killing 8) and on the island of Utoya (killing 69, mostly children) in 2011? How about the recent coffee shop incident in Australia, or the Canadian military memorial and Parliament shootings? Then, most recently in France, the tragic killings of the 11 news agency satirical writers, three French police officers and most of the hostages taken. Here in America we have had numerous Active Shooter incidents in the last few years claiming the lives of scores of innocent people in offices, in schools, a movie theater and other public places.

In addition, we are currently experiencing an unsettling undercurrent of distrust for our police with a large segment of our society feeling disaffected or of less value than another. This has led to protests and riots that have turned violent and to the senseless deaths of protesters and police officers alike. I don’t know if statistically we currently live in a safer world or a more violent one than we did 20 years ago. What I do know is that today’s international news industry is a formidable and pervasive machine providing us with a never-ending stream of violence and tragic events on a global scale. So we are much more aware of violence happening worldwide and it seems that it is happening ALL THE TIME and in PLACES WE LEAST EXPECT: schools, day camps, theaters, café’s, offices, on airplanes, etc.

My point is that we should all train with the expectation that we will confront violence at some point in our lifetimes and that violence will be at a time and place not of our choosing.

We should all train with the expectation that we will confront violence at some point in our lifetimes and that violence will be at a time and place not of our choosing.

Hopefully I have established the need for the best possible training to prepare us to deal with any situation this modern world may present. With that said, realistic training is the subject of MUCH debate not only in the Bujinkan, but also most practical, combative and self-defense oriented fighting systems. Many claim their system is the most realistic, practical and effective and that training has to be as close to real as possible or it won’t work.

An analog to this realistic training concept can be found in our law enforcement and military firearms training methodology, which has drastically changed over the years to include forms of realistic simulation training. [Note: We will look at this interesting phenomenon a bit later in this article.] Some schools posit that constant repetitive training will only work if you are faced with the exact situation that you’ve trained for in the dojo. And other systems believe just the opposite, that thousands of repetitions are required to become proficient and eventually “transcend” technique.

The “More you sweat in training the less you bleed in combat,” is a popular military mantra and it was very true of some of the old-style martial arts schools I trained in during my not so misspent youth. Shito Ryu in Okinawa and Chugoku Kukemp-do in Aomori, Japan were two schools I trained in that followed this philosophy. They also believed in sparring as an important way to test your skill level at various stages of your training. I did lots and lots of sparring and full contact tournaments in my early days of training. I was not the best at sparring but I loved doing it because I learned so many valuable lessons: how to take a good punch or kick and get back up and continue, fight strategy, conserving energy, patience, timing, distance, observing the opponent for tells, to name a few.

There is another line of thought that the Triune brain or Reptile brain as it’s more commonly known, determines what we do in a survival or panic situation. The Triune brain is the oldest of our three brains and is most closely associated with instinctual behavior in survival situations (fight or flight). The Reptile brain takes over from the Cerebrum brain or Cerebral Cortex (the logical, perceiving, thinking brain) when the situation is most dire. It is commonly believed that the Thinking brain may freeze in a survival situation and will be unable to process information, think logically and act accordingly (assess, plan, act using my Shinken vernacular). I say “may” freeze, not “will” freeze. [Note: Keep this point in mind as you read through the rest of this article.]

It is commonly thought that the Reptile brain does not respond to any training at all. It is what it is and the best way to learn how it will respond is by studying your reaction to surprise stimuli. Some professionals call this your flinch response. Rory Miller and Tony Blauer each teach methods for students to understand what their flinch response will be. I’ve been through it and believe it is an enlightening form of training. So enlightening that I’ve added it to my own Shinken Taijutsu training program. 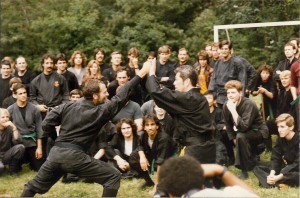 I think the Bujinkan gets somewhat of a bad rap that we train only to counter long distance punches and kicks and that our Uke is just there to “help” us “ look good” while doing the technique. It’s not a realistic form of attack, your opponent won’t just stand there with their arm or leg extended waiting for you to do something, it’s too touchy-feely, etc. Those of us who have been around the Bujinkan for a few decades have heard these criticisms and more. In truth there are a few dojo(s) that train this way, I have seen them. Fortunately, they are the exception and I think generally they are just misguided or isolated from a quality instructor.

Eventually it seems legitimate Bujinkan dojo will either autocorrect or get squared-away by a good Shihan. The not so legit ones seem to either simply fade away or be forced to withdraw from using the Bujinkan due to public outcry. I don’t go looking for these groups to “fix”, but if someone asks for my help I will do my best to provide it. [Note: Don Roley is very good at pointing out fraudulent instructors and illegitimate schools on his blog and Facebook page.]

There is no set Bujinkan training method. What makes us unique is the freedom that Soke gives to all Shidoshi and above to teach and train as they see fit. The Kihon Happo, Go Gyo and Tenchijin Raku no Maki are always emphasized in Japan, but little else other than the ever-changing annual theme. As long as we adhere to a loose set of guidelines, it is generally left up to the individual dojo senior as to how training is conducted in their dojo.

With that said, what IS the best way to train? How do we know our training will save us in our darkest hour?

I am interested in your views on this topic and welcome your comments and questions in the box below. My own take on it is posted in part 2 of this article