Sword Training with a Japanese Shihan 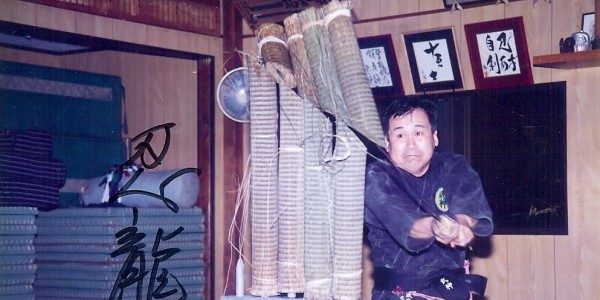 Throughout my many years of traveling to Japan for training, I would make specific time to work with one of the top Japanese Shihan who is well known for his skill with the sword. Some say Someya Sensei was taught sword by Hatsumi Soke, others may say Manaka[1] was his sword teacher and still others have opined he was self-taught. I believe it was a combination of all three–I know he learned sword basics from Manaka, just as I did and many others back in our early days of training. During discussion on sword one evening, Someya Sensei told me that Soke had given him some private instruction in sword and also directed him to study the sword on his own and outside the Bujinkan. He must have learned tamashigiri (cutting tatami mats) during his outside studies since that is not something we have ever practice at the Hombu. Regardless of where or how Someya Sensei received his training, few can deny his knowledge of swords, sword etiquette and his skill in cutting. For proof of his cutting prowess see these photos of Someya Sensei cutting four tatami mats and a hanging tatami mat. Both of these cuts require tremendous skill to pull off. 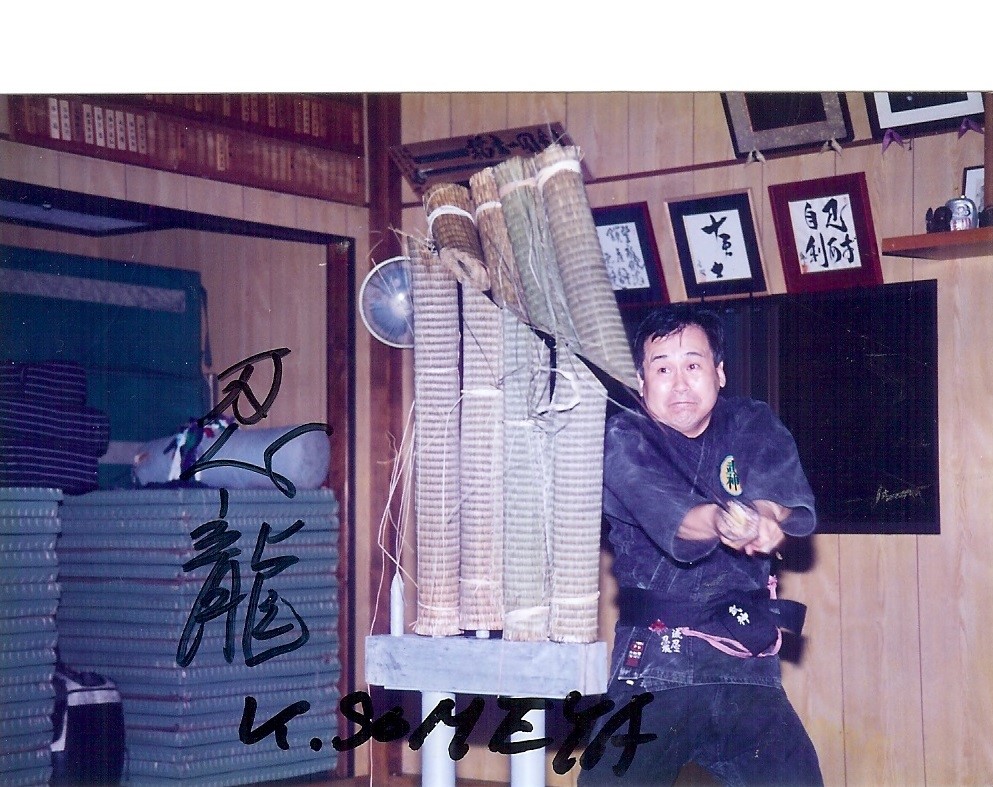 Massive 4 tatami cut! Note his shoulders and the line of the blade coming through the target

Very difficult to cut a weightless tatami. Again notice the blade line after cleaving through the target

When word got out that Someya Sensei was teaching sword cutting using live blades (circa ’00-‘01), a number of gaijin (myself included) went to his dojo to try our hand at cutting tatami mats. I took a number of my senior students to those initial cutting sessions and with Someya Sensei’s permission we filmed a few of these classes.[2] There were other gaijin present at those trainings, as well as a number of resident students. Don Roley was one of Someya Sensei’s regular students at that time and he was gracious enough to be our dojo translator. In this first photo, Someya Sensei is teaching us how to properly draw a sword. Note that we are all staring intently at his hands. By the way, in case you don’t know him, that is Don standing on the left side with a Bokken resting on his shoulder. 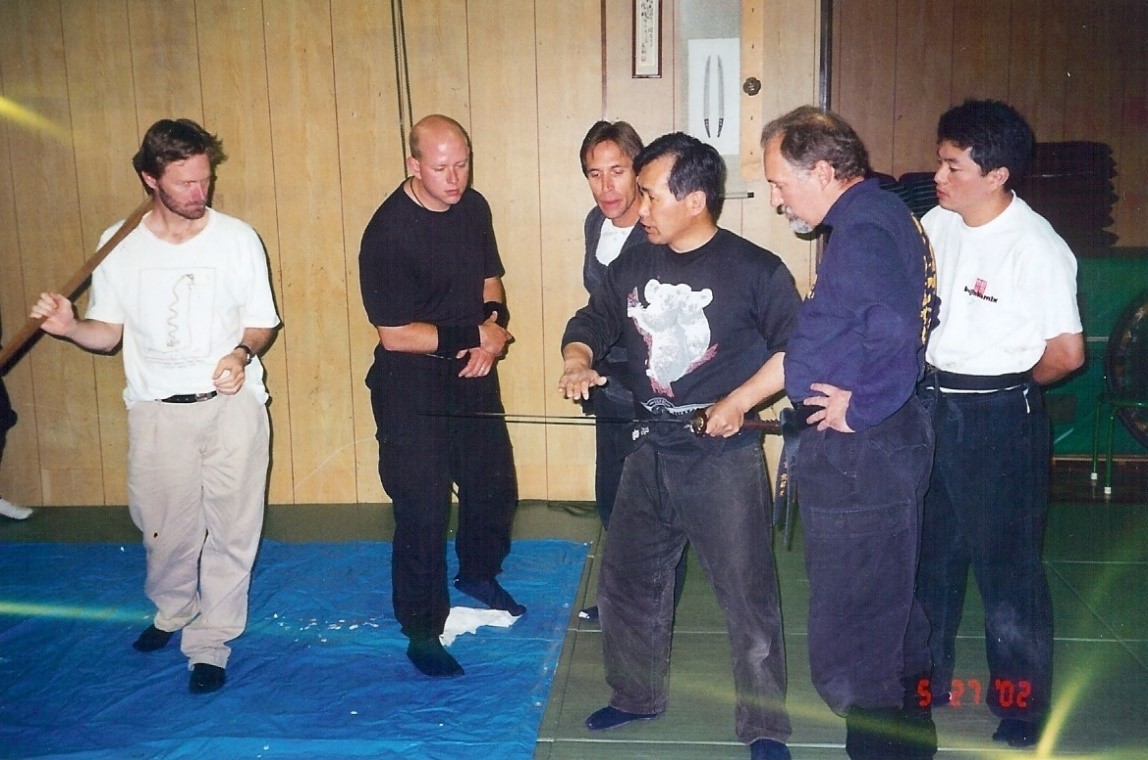 Someya-sensei getting ready to draw my new sword. Don Roley on left

In May of 2002, after completing a long combat tour in Afghanistan (that started for me about two weeks after 9-11), I led a group of students to Japan for training. Shortly after our arrival I went to Zama City and bought a Batto cutting sword from an Iaido Sensei who was also a sword dealer. I have Penny Telfer to thank for that introduction. At the time she was on Active Duty Reserve status and stationed at Camp Zama. I brought my new sword to the next Sunday class at Hombu for Soke and the other Shihan to see. There was much envy over my new possession and Soke and Someya Sensei both told me that it was a high quality-cutting sword. Someya Sensei suggested I bring it to his next evening class to try out on the Tatami. I could tell he really wanted to try it out and I could hardly wait myself. [Note: Part of the reason I wanted to buy my own cutting sword was so I could use my own blade during his class rather than borrowing one of his sword.] You will see in the next photo I am kneeling and drawing my new sword to present to Someya Sensei. That is Don on the right side of the photo, squatting between Charles and Jim. 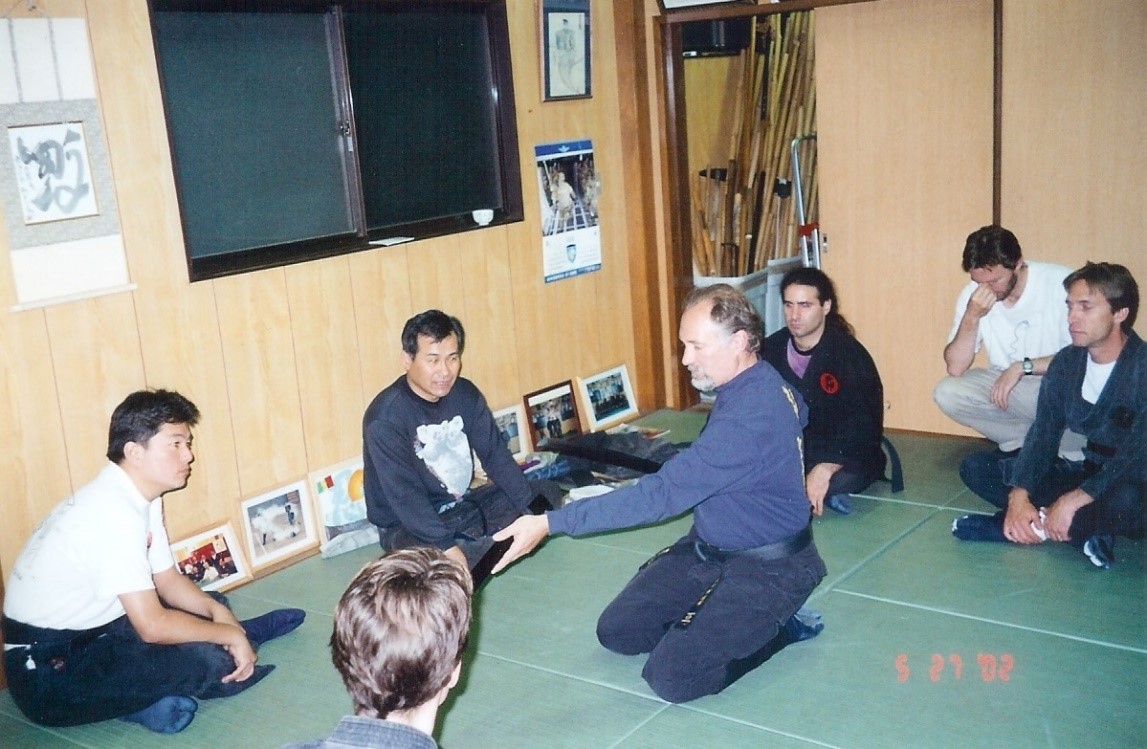 Usually Someya Sensei would start each class by going over sword basics, including wearing the sword properly on your belt, draw technique, handing the sword to someone properly and cutting. Because our skill level as a group (of gaijin) was so low, Someya Sensei would have us do a LOT of handling and cutting drills in the air with Bokken first before anyone was allowed to touch one of his live blades. When it came time to cut, it was very interesting to see how little we knew of the mechanics of cutting. We did not have a strong base to build upon[3]. Most of the gaijin Shihan at that time seemed to have trouble cutting just one tatami mat. Their swords either got stuck in the Tatami mat or only partially cut the mat or the cut was a not a cut at all but a bash. It was obvious they had never been taught the basics of sword cutting or if they had, they had never practiced them.

Someya Sensei explained that a common mistake is to start the blade on the target too shallow (too close to the tip) and then pull the blade back toward your left hip as you cut. This usually led to a shallow cut and/or the blade getting stuck in the middle of the tatami roll. In extreme cases, the blade would turn so much that the side of the sword bashed into the Tatami instead of the blade. If the blade got stuck, an elbow bend would appear somewhere in the top 1/3 of the blade (toward to tip). It was very interesting to watch Someya Sensei straighten his blade after someone bent it. After watching so many gaijin fail to make this simple cut, he would stop the live cutting and have us go back to air drills with Bokken. I recall Someya Sensei’s look of concern that so many senior gaijin did not have the skill to cut just a single tatami without bending his blades. The more his blades were bent, the less inclined he was to let anyone other than his own students use them for cutting.

The most common corrections were to our Te no Uchi (grip) and turning the shoulders. To much shoulder turn (a slicing type cut that pulls the sword back toward your left hip) causes most blades to turn sideways somewhere in the target, leading to a stuck and bent blade. Eventually, you had to demonstrate proper cutting skills before Someya Sensei allowed you to use one of his live blades to cut Tatami. The main reason I bought my own sword was so I wouldn’t have to borrow one from Someya Sensei. Although I never had any problems cutting with his swords, I just didn’t want to be “one of those gaijin” who came like a beggar to Someya Sensei’s dojo. The next two photos show the results of two of my cuts to a single tatami. This is a very simple cut as long as you position the sword to start the cut about in the middle of the blade (the sweet spot as Someya Sensei calls it) and allow the weight of the blade to fall through the tatami in a straight line. The blade must remain straight all the way through the cut so as not to get stuck/bent. 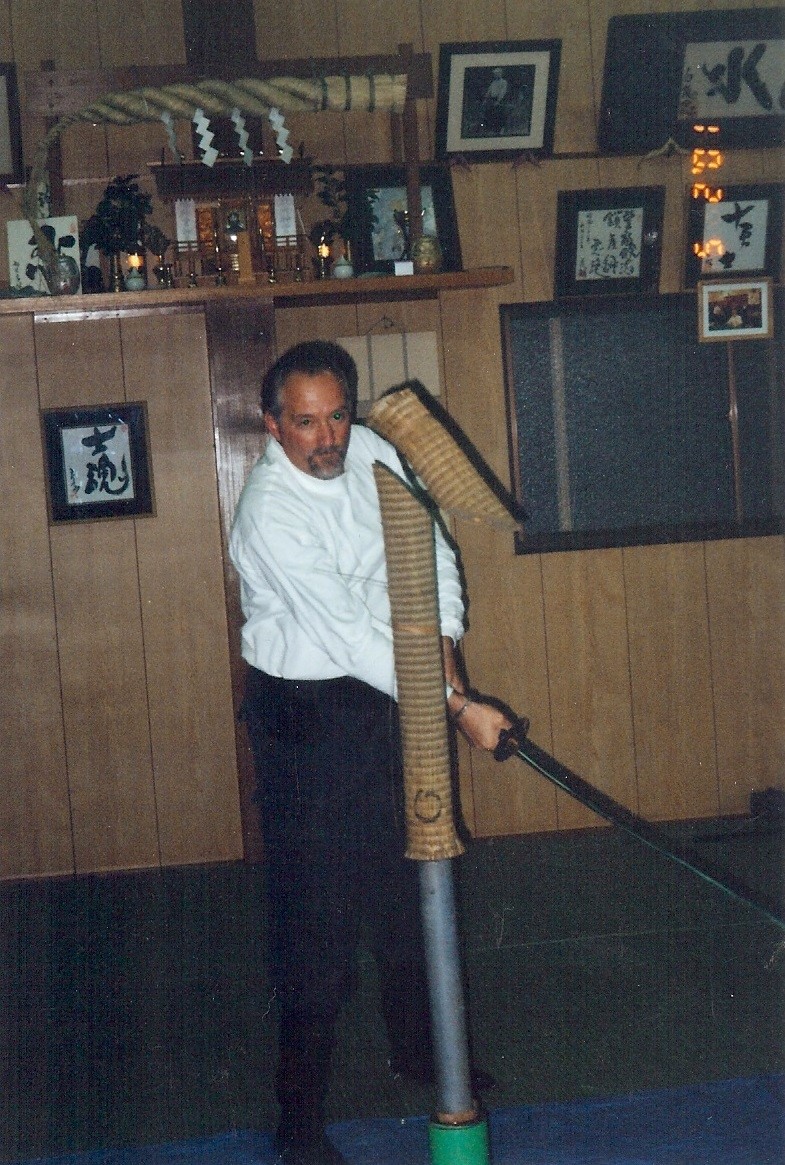 First cut, notice my right shoulder points slightly to the right of the target. A common mistake is to pull the left shoulder back too far, causing the right to cross the target (following the left around) this causes the blade to twist in the target. Note that the blade and my right thumb knuckle are in line with the cut. 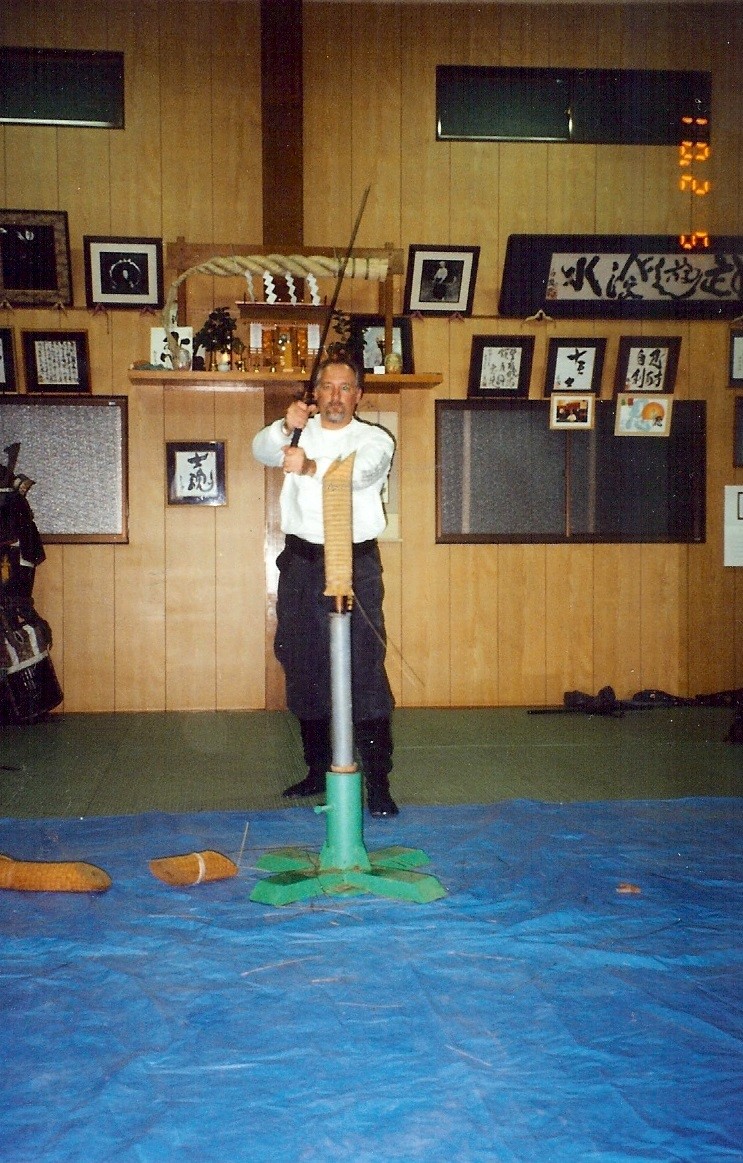 2nd cut in reverse direction. Tatami is getting shorter, I made 1 more cut on this tatami (not pictured)

The next four photos are of Someya Sensei and I leading the dojo through sword basics with live blades. The first two photos show the proper carry position of the sword while in your Obi (Note: The Tsuka is pointed upward at an approximate 45 degree angle, not pointing forward- a common mistake.). The final two photos in this set of four show Someya Sensei and I after the draw in a Gedan guard position and then the beginning of Chiburi (returning the sword to the Saya). Look at each of our Te no Uchi. What do you see there? Mark Lithgow has said that. “how someone grips a sword is a “tell” of which sword school you trained in”. Each sword school has their own signature grip. As you can see, both of us are in Hatsumi Soke’s style of a flexible loose grip (as in shaking someone’s hand). Mark’s Shinkage Ryu grip is much different. For me, I switch between these two grips— I now generally grip the sword in the Shinkage Ryu grip for power and shift to the Bujinkan version for flexibility. You may also notice I have my right foot forward and Someya Sensei has his left. Either is correct, depending on if you are in Omote or Ura. We did this so the camera could pick up the differences in our kamae. 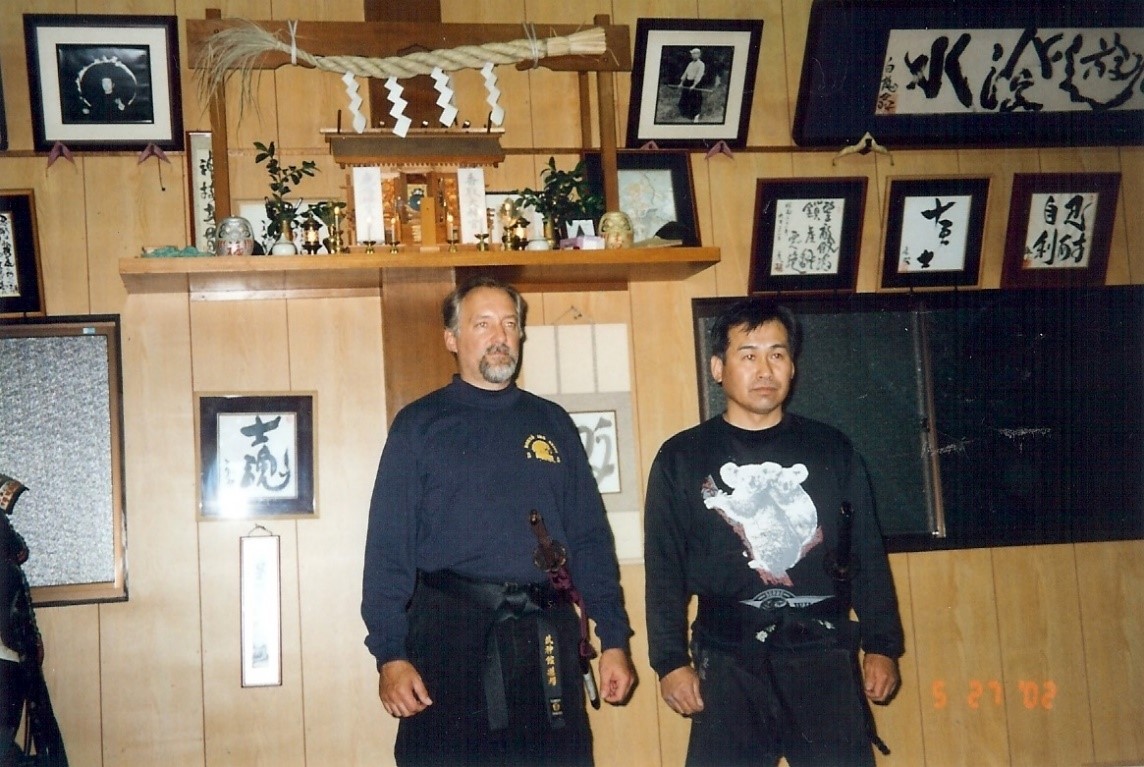 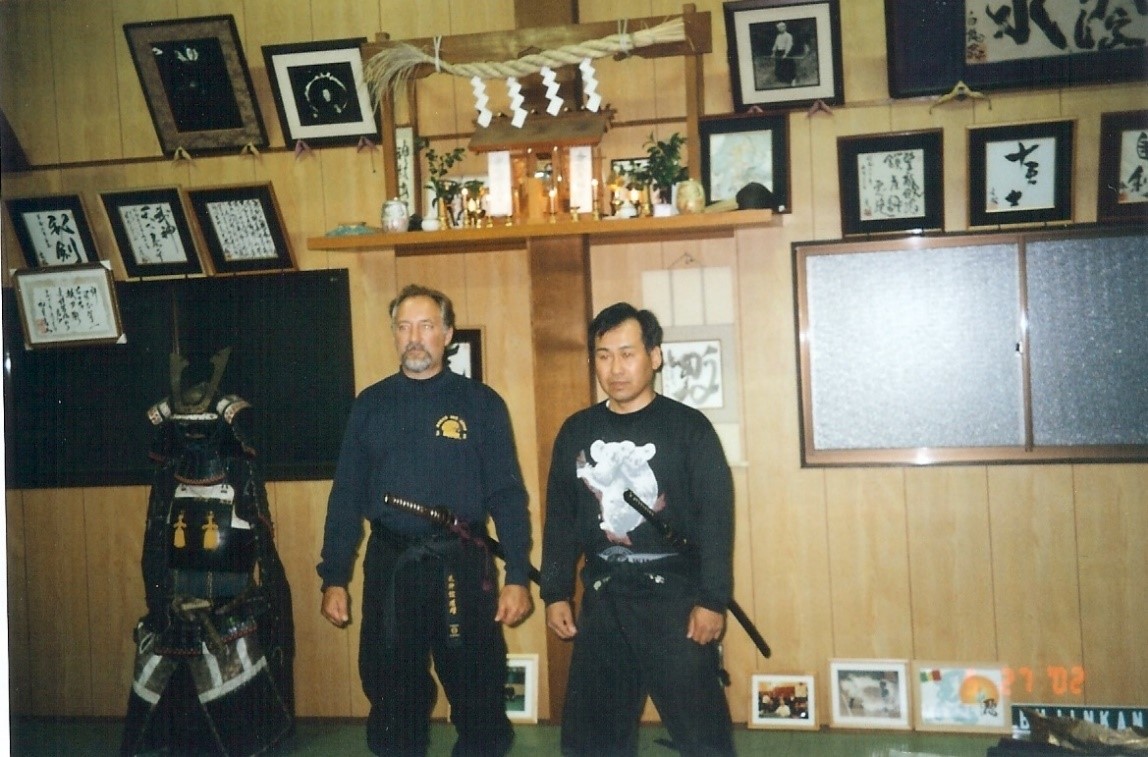 Note that the tsuka points upward, not straight out. 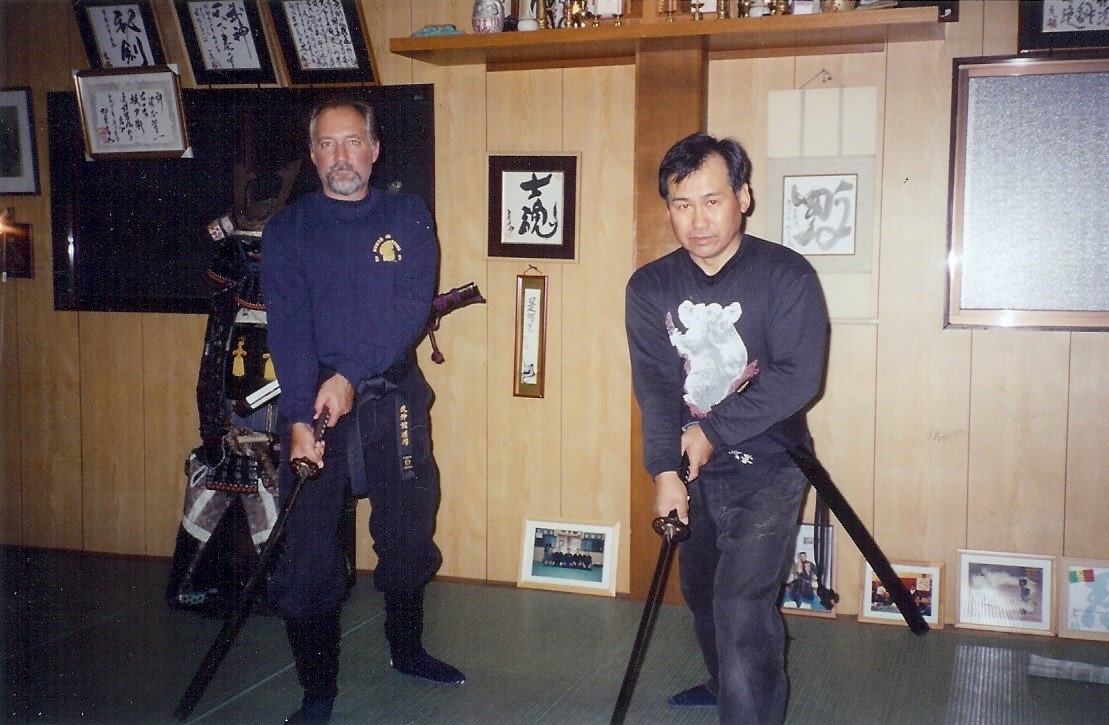 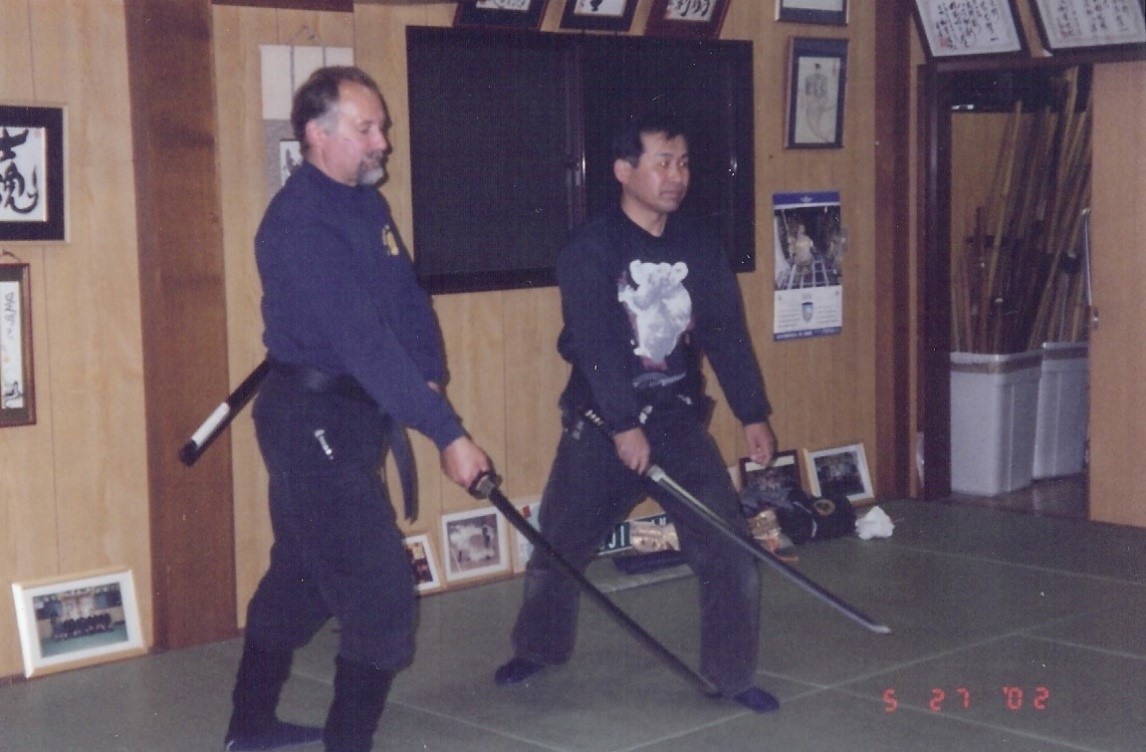 Gedan and beginning of chiburi

I encourage any Bujinkan student serious about learning proper sword etiquette, sword handling and sword cutting to seek out Someya Sensei‘s dojo and attend his training. Someya Sensei’s dojo is not hard to find. It is within walking distance of Umesato Station. Make sure you first get permission from Someya Sensei to attend his class and also make sure to get proper directions before trying to find it on your own.

For video reference of Someya Sensei’s sword training check out our Taka Seigi Member Site – It will be posted up soon. I hope you have enjoyed this short article on sword and as always I welcome your questions and comments.

[1] Fumio Manaka was one of Hatsumi Soke’s senior-most students who retired from training in the Bujinkan and started his own school called Jinenkan in 1996. He was Someya’s teacher as well as many of the early gaijin who moved to Japan in the late 80’s and 90’s. He was my primary Sensei (other than Soke) for approximately 15 years until he retired from the Bujinkan.

[2] Someya Sensei gave us permission to film several of his sword sessions. Shihan Don Schmidt did the filming of those early sessions and we will be adding some of this video to our website soon.

[3] For more information on training and the importance of building a strong foundation of basics before moving onto Henka see my latest article on the TakaSeigi website titled, “Will Your Training Save You?”.