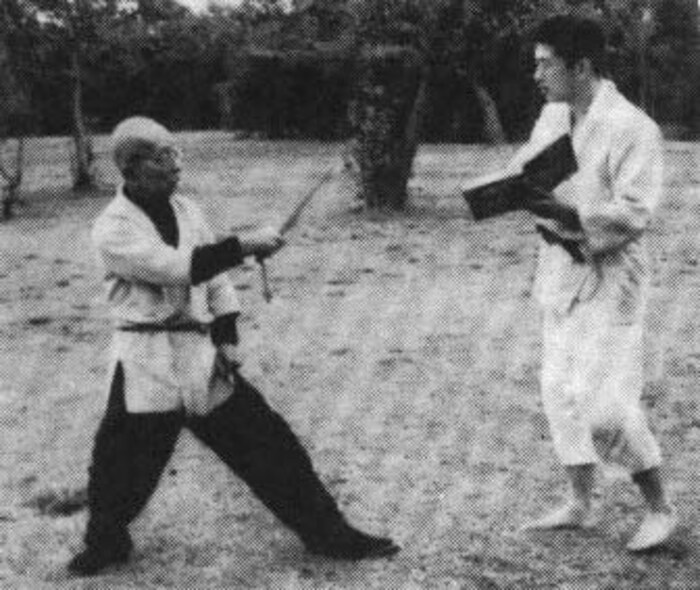 So, Who’s Kihon is right?

Soke gave us the Six Treasures of the Bujinkan at the last Shidoshi-kai, held on 2 September 2017. The first two Treasures are the Kihon Happo and the San Shin. He said we must practice these two Treasures every day. Soke then specifically directed all 15th dans, Yushu-Shihans and Dai-Shihans, that we must pass these Treasures onto our students all over the world.

So, if the 15th dans are to pass these Treasures on, which Kihon Happo and San Shin version are the correct ones? Whose basics do we copy? Nagato, Noguchi, Senno Dai-Shihan’ basics or Soke’s from his 80’s and 90’s videos? Or do we forge ahead with our own version? I have to ask myself as well – where did my version of the Kihon Happo and San Shin come from? Reflecting on this, I can see that my “fundamentals” are a combination of Doron Navon’s (you can see recent video on YouTube of Doron demonstrating Musha Dori on me in the early ’90s), Manaka Sensei’s (before he quit), Noguchi Sensei’s (he started his private class with the Tenchijin Raku no Maki), and Nagato Sensei’s (my more recent training with him) versions. So my basics are not only a combination of these four Sensei, but an adaption of them to my own body type, flexibility, strength and attitude. So, think about who has influenced your fundamentals over the years and how you have been molded to who you are today.

Another major influence to my own Kihon Happo came to me from a visit by an old friend. A few years ago, I hosted Mark Lithgow for his first U.S. seminar in about 20 years. Together we read descriptions of the Kihon Happo from our Shidoshi-Kai notes that Soke had given us over the years. Mark translated them word-for-word from the Japanese and I helped to put these words into action. Attempting to physically demonstrate the vague descriptions was challenging at first – there was at least one technique that had the feet backwards. To this day we are not sure if that was intentional or just a typing error, but that one made sense with a simple reversal of the feet. I believe this version, contained in the Shidoshi-kai notes, are the original descriptive version of what we see being performed on the old training video dating back to the early 80’s. At hombu several Sundays ago, Soke declared that the 15th dans must be able to perform the Kihon Happo and San Shin perfectly and on demand. By saying this, Soke must have his own idea of what the perfect Kihon Happo and San Shin look like, right? Given this powerful statement by Soke, I suggest we compare as many references as we can. If you have the Shidoshi-kai notes, compare them with the older videos of Soke demonstrating the Fundamentals and the Purple Book’s Tenchijin Raku no Maki. Look for commonalities in these three resources and once you are thoroughly familiar with an (or maybe the) original version vs your own evolved version then question the the Dai-Shihan.. I took Soke’s charge seriously and I can demo both the original and my own evolved versions on demand.

So, to get the party started, so to speak, here are the Kihon Happo waza according to my Shidoshi-Kai notes:

3 Kamae with strikes, 5 Taijutsu grapple techniques (3 of them to the wrist and 2 to the elbow)

[Note: Ganseki Nage and OniKudaki are NOT part of the Kihon Happo. Adding these 2 in makes 10 techniques in all and it would be called something like Kihon Juppo (I don’t claim to be a linguist). However, if we make it clear to our students that these 2 are not part of the Kihon Happo, that we have added them in intentionally for training, then I think that is fine.. It makes sense to add them in so our students can progress from wrist, to elbow, to shoulder techniques all in one go. You also keep the rhythm of the Kihon Happo going with Onikudaki taking the shoulder in Omote and Ganseki Nage taking the shoulder in Ura.]

These are the 8 Kihon Happo techniques according to my notes. As it turns out Noguchi Sensei and Nagato Sensei both have the same notes that they go by. Sometime in late 2015 or early 2016, after leading the Sunday Hombu class through the San Shin and Kihon Happo warm ups for the umpteenth time, Senno Sensei came to me and suggested that I move my hand directly over my head instead of moving straight up in alignment with my elbow for Ku no Kata. I told him that is the way I was taught. He agreed that was the way we did Ku no Kata in the 80s and 90s and he wasn’t exactly sure when this small change happened. We both thought about it and he suggested my way was the original way, but now Soke wants us to do it this new way. He said, maybe it is a more advanced form of Ku no Waza. I said.. no problem and I immediately changed my hand position when doing Ku no Waza. For some reason, Senno Sensei was amazed I could change my hand position without thinking about it. I told him my key is to not memorize things, just let them flow if possible. It was a simple change after all. I then asked him about the rest of my version of the KH and SS. Was it correct? He said it was perfect. So I have led Sunday classes like this many times starting off with either the San Shin first or the Kihon Happo. Senno, Noguchi and/or Nagato Sensei are usually watching me from the entrance to the dojo proper. They have all said my version of the KH and SS are very good and to keep doing them for the Sunday classes when Soke is late. With 3 Japanese Dai-Shihans’ blessing and me being a Dai-Shihan myself, I will continue along this path and teach my students and my friends my way until instructed otherwise.

In the near future I will film my version of the Kihon Happo and San Shin and put it up on our website for members to reference. I will also attempt to get both Nagato Sensei and Noguchi Sensei on film doing the same. Then members can compare the 3 of us and see subtle differences. There are some differences, but I believe they are due to body type, size and attitude.

Attached is a basic translate of what Kihon Happo means(Click on the image to see it in full size.) As always post your questions and I will answer as many as I can. Gambatte!! Phil

My advice to all Shihan is to break out the old books and video tapes and re-familiarize yourselves with the original set of basics and in the way that we used to do them. It’s only natural that over the years, those of us who are teachers, that we stylize these basic waza to make them our own (version). The younger generation of Bujinkan students of ours may have only been taught a newer version and may not even realize that there is an original version that came before. What some think of as the basics may be significantly different from what Soke and the Dai-Shihan know of as the original basics. This may even be true for some of the Dai-Shihan, especially for the ones who don’t live in Japan as I do.

Hopefully, now that Soke has said how important the Kihon Happo and San Shin are to Bujinkan practitioners, visitors to Japan will understand why I warm up the Sunday Hombu class with them first before showing anything else to work on. Maybe now everyone will practice them along with me instead of standing in the back of the dojo with arms folded, looking bored. No one should ever think that they are too high ranked to do these basics. If you think that way, then you are wrong. Heed Soke’s words. Study hard and keep going.