What is Bujinkan Shinken Taijutsu?

What is Shinken Taijutsu?

Simply put, Shinken Taijutsu is the modern combat application of Budo Taijutsu. Shinken is the Taijutsu of the Bujinkan martial arts put into modern context to effectively deal with modern weapons and dangerous situations we may face today, while staying within our legal framework.

In 1995, I started teaching a form of combatives, called Protective Measures, to military and government employees who had to work in high threat environments. The core of the combatives program that I put together comes from Budo Taijutsu; specifically Taisabaki (natural body movements), ma-ii (distancing), timing and the strategy of henka (flexibility to adapt technique to new situations). Another part comes from the previous USMC close combat system (which was called the LINE system) and the current CC system (called MCMAP). Back in the late 80s, I was fortunate enough to be asked by then Commandant, GEN Al Gray, to assist creating the LINE program. The Marine Corps combat mindset and use of modern military weapons and tactics were added to my program. Finally, Officer Safety and Survival techniques and tactics for dealing with the civilian threat (criminal/terrorist) were added to the program. These were added from my experiences as a DOD Special Agent and training at the FLETC, ITI, BSR, InSight, HRP, and other government sponsored training. 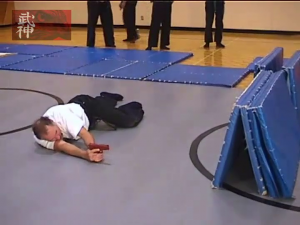 For this combatives program, I combined the best from the Bujinkan, USMC, law enforcement and government/civilian agencies. Plus I added my years of experience in combat and real world threat situations. This program was extremely effective and popular within the government circles where I taught it. I trained a cadre of instructors and eventually outsourced the training. As of 2007, more than 3,000 people have been been through this program and we have received numerous testimonials from students that this training saved lives.
In 1996, I asked Soke how I could certify instructors in this program so they could teach it in the future. He stated that what I was really teaching was the Shinken Gata of the Bujinkan, plus the Shinken Gata of military and law enforcement training. Soke honored me with a Menkyo Kaiden in Shinken Gata and authorized me to teach this art however I wished, but only to good people. To honor Soke and to recognize the Bujinkan as the core of what I teach, I call this Shinken Taijutsu.
Today, you can train in Shinken Taijutsu as part of what is taught in the Bujinkan Taka-Seigi Dojo. Currently there are 2 levels of Shinken Taijutsu. Level I is all defensive. It is broken down into 7 modules plus a practical exam. The modules include:

Introduction: What is Shinken Taijutsu. Survival mindset. Awareness. Assessing your situation. Breath, think, act. Getting off the X. Basic defense and offensive stances, movement and striking. Approximately 2 hours to instruct.

Module 1 Ground Defense – how to survive getting knocked down, protect yourself while on the ground and fight you way to a safe location. Approximately 90 minutes to instruct.

Module 2 Defense Against Grabs and Chokes – surviving common scenarios of being grabbed, choked and incapacitate opponent and moving to a safe location. Approximately 2.5 – 3 hours to instruct.

Module 3 Defense Against Blunt Weapons – surviving being attacked with a blunt weapon, such as a ball bat, crow bar, truncheon and the like, disarm and incapacitate opponent and moving to a safe location. Approximately 1 hour to instruct.

Module 4 Defense Against Edged Weapons, Pre-Contact – surviving being attacked by edged weapons, such as a machete, fixed blade knife and folding knife, disarm and incapacitate opponent and moving to a safe location. Builds on the previous module. Approximately 1 hour to instruct.

Module 5 Defense Against Edged Weapons, On-Contact – surviving being held at knife point, disarm and incapacitate opponent and moving to a safe location. Builds on Module 2. Approximately 90 minutes to instructor.

Module 6 Defense Against Firearms – surviving being held at gun point, disarm and incapacitate opponent and moving to a safe location. Builds on Modules 3 and 4. Approximately 2 hours to instruct.

Module 7 Defense Against Multiple Attackers and Improvised Weapons. Builds on all modules. Approximately 2 hours to instruct.

Review and Practical Exam. Students must satisfactorily complete the PE in order to be considered for the Shinken Taijutsu Instructor Program. Review approximately 1 hour to instruct. PE takes approximately 5 minutes per student to instruct.

Where is the curriculum for Shinken Taijutsu Level I? The curriculum can be found in the BTSD Gedan and Chudan rank manuals as additional training. The teaching outline/check sheets for each module are in the back of the Gedan manual (Mukyu – Shodan). The written explanations and practical exam forms can be found in the back of the Chudan manual (Shodan – Godan). The curriculum is constantly being updated and improved as new information becomes available. This is a dynamic course that adjusts to new threats, new scenarios and new weapons as they present themselves (the 9-11 attacks were an example of how threats, scenarios and weapons change in these times).

Shinken Taijutsu Level II is advanced defense and offensive combatives. There are currently 5 modules in Level II with a number more under development and/or under contract.

Module One: Tactical flashlight. Use of flashlight in both defense and offense. Approximately 8 hours to instruct.

Module Two: Defensive and offensive use of collapsible baton. Approximately 8 hours to instruct.

Module Five: Transitioning between weapons systems in both defense and offense. Approximately 16-20 hours to instruct.

Module Six: Progressive Firearms. Under development. Majority of this module will be outsourced to my specifications.

Check out our website and this blog to learn more.