At the Shidoshi-Kai yesterday Soke spoke about the True Treasures of the Bujinkan. He charged each and every Shidoshi, Shihan, Yusuu Shihan and especially the Dai-Shihan to abide by and pass on these 6 treasures. Here are the 6 Treasures Soke spoke of: 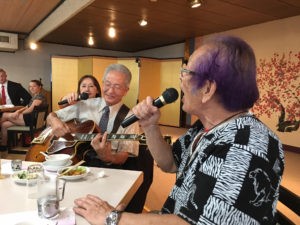 Soke talks about the 6 treasures of the Bujinkan

I attended the April 2, 2016 celebration honoring the 42nd year of Takamatsu’s passing (a seminal event of ascension in the Buddhist tradition). During the celebration, Sayaka, daughter of the late Oguri Dai-Shihan, spoke of her Father’s daily routine of practicing the Kihon Happo, San Shin and Tenchijin Raku no Maki. She said that her Father believed it was most important for a Bujinkan Budokan to practice these basics each and every day so that we do not forget our basis of Taijutsu, that which all Henka comes from. I had the great honor to administer the Godan test to Sayaka the next day, the first day of the era of Hatsumi in the Bujinkan.

At Hombu training yesterday before Soke arrived, Kan Sensei had everyone practicing Omote Gyaku. He was visibly upset that many of the students (Gaijin and Japanese alike) were not doing or did not know the basic form of this technique. He demonstrated a number of times how to do the basic version and he emphasized to everyone that we must know the basic way to do each of the Kihon techniques before we can ever hope to make Henka. And we must continue to do and teach the basic forms, no matter what rank we are, so we do not forget them. What Kan Sensei said and demonstrated dovetailed perfectly with Soke’s point about the Kihon being one of the Bujinkan Treasures. [My comment: This is a really important point, just because Soke or the senior Japanese Shihan may not do the basics when Gaijin visit their dojo, does not mean they don’t practice the basics on their own or that we should stop doing them when we reach a certain rank either. No matter what rank you are, we all must do the basics. Oguri Dai-Shihan is our example of this.] This was a key point of both Soke and Kan’s discussion yesterday.

Soke finished by saying that we must teach our students all 6 of these treasures each and every day and build communities of true Budoka in the Bujinkan.

After I sat down, Soke reaffirmed to me and to the Dai-Shihan at our table that I will host him for a Final TaiKai in Washington DC sometime next year. He then told all of the Dai-Shihan sitting at our table that they MUST go to the Washington TaiKai with him. He said each Dai-Shihan’s name and told them they had to attend. This was Noguchi, Nagato, Ishizuka and Kan. He said if Senno is well by then, he would come too. They all agreed. I asked Soke if he had a date in mind and he said, Shogannai. Meaning it is up to the gods to decide. He said he cannot set a date yet due to Okusan’s health. However, he said most assuredly that I will host him for a TaiKai next year in Washington DC. He remembered with fondness the 2001 Washington TaiKai that we held at the JW Marriott, very close to the White House. He said the 2001 TaiKai was the grandest TaiKai ever and he wanted me to host him for an even grander Final TaiKai next year. I think what Soke has in mind by making it mandatory for the Japanese Dai-Shihan to attend is that he will have all of them demonstrate his true Budo at the Final TaiKai. It is a chance also for the world to see just how good each of these gentlemen are in their own Budo Taijutsu. Sounds like an incredible opportunity to see all of the Japanese Seniors demonstrating in one venue. Stay flexible for the date and hopefully we will know something soon. 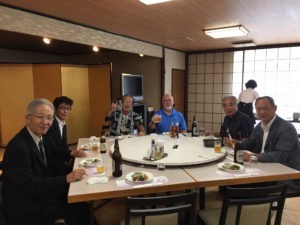 The Shidoshi-Kai was a lot of fun. Ishizuka played guitar and he and Soke sang a few old Hawaiian songs. One of the German guys got up and sang 99 Balloons in German and then others got into the act. Soke had a great time, but we missed Doug playing guitar and singing and we missed Hiromi dancing at this one. They were both unable to attend. I had to leave soon after the karaoke started, but promised Soke that I will sing a few old Japanese anka songs that I used to sing years ago at the NHK and RBC TV Karaoke challenges.

I hope to see you all at Hombu soon or at one of my upcoming seminars in Pittsburgh, Baltimore, Birmingham and Buenos Aires (Oct-Nov). All the best in Budo and in life.