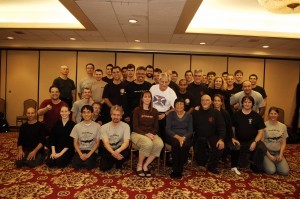 So I was reading an article in my VFW magazine yesterday about the ancient Greek Olympics and how the games resembled warfare. The article’s precis was that the Greeks designed their original Olympic games to promote combat fitness. For example, the Marathon race as we know it today was originally run in armor and carrying shields. The Pankration was a form of brutal no-holds barred wrestling, much like close combat of the time. Boxing was without gloves and no strikes were considered off-limits. Boxing matches could last many hours and sometimes late in the day the boxers would make a pact to take turns hitting each other unopposed in order to end the match before nightfall. It was written that boxing was meant to teach young Greek males to toughen their bodies and condition themselves to take blows to the head, such as what they would experience in close quarter combat back then. The 2 and 4 horse chariot races mimicked early cavalry charges and bringing support troops up from the rear to the fight. Chariot racing killed more participants than any other Olympic sport back then. These early “sports” were quite often to the death with the common motto of the participants being, “win or die trying.”

Back when the Olympic games were first created (around 700 BC), Greece had few allies and was almost constantly under threat of war with its neighbors. Little changed for the next 1000 years or so. Mount Olympus today is covered with monuments to wars of the ancient past, as well as to the ancient Olympic games. On this same mountain to which our modern games are named, Alexander the Great would have his conquests proclaimed to the masses.

I find it quite interesting to ponder the origins of the Olympic games as I watch the summer games being played out now in London.

Thinking of warriors from our past, the picture included in this blog was our memorial seminar for Shihan Dick Severance after he passed away in 2009 due to cancer. Seated in the middle is his wife Bess and daughter Kim.