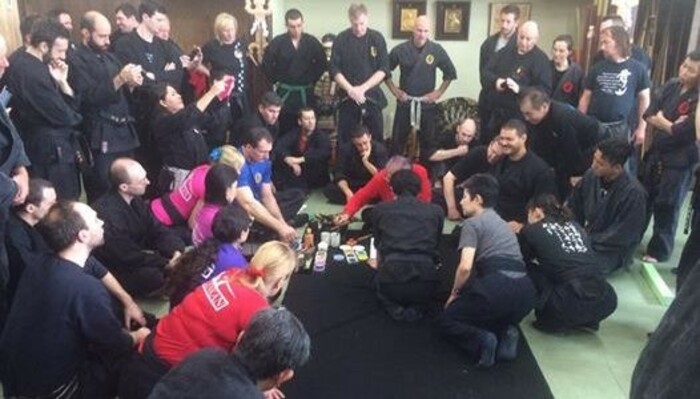 I really liked how Phillip started the class before Sensei came. He spoke of how several people mentioned at the recent memorial event about the importance of kihon, and started the class with the Sanshin no Kata. He counted us through it, 10 times each technique, much like many of the classes in Japan in the past used to be started. The speed he counted was pretty much a standard speed that we always used to warm up to. I was a little shocked to look around the dojo and see how much trouble many people had keeping up. Several people were just standing, looking around with confused expressions.

Much of what Sensei taught today involved being ‘solid’ and strong. He likes to say “Don’t use power”, but people can take him a little too literally sometimes. What he is really saying is “Don’t use unnecessary power… Don’t use power all the time, but you always have to have (structural) strength”.

Near the end of class, after we’d been doing some sword stuff, he did a kind of chiburi technique, then, with a mischievous look on his face, licked the blade. He talked about knowing the difference in taste between male and female blood. He then went on to say that on a battlefield, you had to be able to recognise the smell of male and female blood. I translated that to the class, and after a short pause, he turned to me, with a big smile, and said “Of course I’m messing with you!”

“Don’t believe everything I say!” he said. “Believe half of what I say, but use your own judgement too!” As an example, he said that he might say “Don’t worry! This sword isn’t sharp… It’s just a training sword!” But really, it IS sharp, and you are in danger. Even though he tells you something, you have to make the final call yourself!”