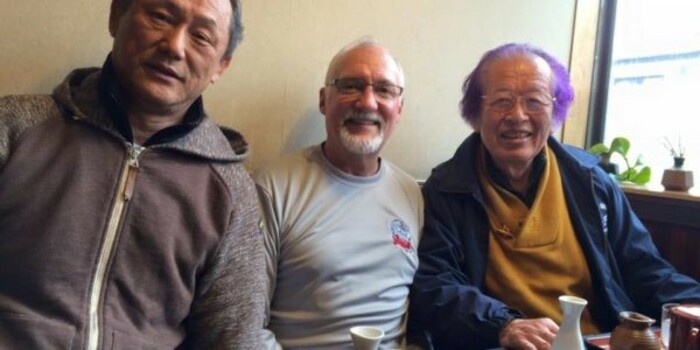 About the Godan Test

DON’T BE IN A HURRY

(to take the Godan test)
An article by Phillip Legare

(Written in summer of 2005 while living in Japan)

At the end of Sunday training at the Bujinkan Hombu Dojo recently, several people lined up to take the Godan test. If you haven’t been to Japan, you may have never seen this test given before. So I will explain it briefly before continuing with the story.

The Godan test (5th dan test) or Sakki test (test of Spirit), as it is sometimes called, is the test given by Soke to Bujinkan students who are recommended by their Shihan for 5th degree black belt. Usually the person taking the test is already a Yondan (4th degree black belt), but not always.

The most common way that we see people recommended for the test is that foreign Shihan will visit Japan with some of their students, and they are put up by the Shihan to take the test during the trip. Sometimes a student will show up with a letter of recommendation from their Shihan to take the Godan test. (Author’s note: If the Shihan cannot accompany his student to Japan, this is the most polite way to recommend someone for the test.) Every once in a while, Soke himself might take a personal interest in someone during training and ask them how long they have been training, who is their teacher, etc. and then may tell that person to take the test at the end of class.

Okay, so you have a good idea how someone is recommended to take the test. So what is this test anyway? Basically, it is a test of being able to let go. The student will kneel down facing away from Soke, close their eyes and try to be calm. The student should try to relax and reach a state of no mind called “MU.” Soke will then raise a padded sword over the head of the student taking the test. Soke will close his eyes and gather his Ki. Once Soke feels the time is right, he will strike down with the sword. The student must feel Soke’s intention and do proper ukemi to avoid being hit.

During the test, the senior Shihan (both Japanese and Gaijin) will be lined up along the side of the dojo to observe and grade the test. Soke normally gives each student one chance to pass the test with him. If the student fails Soke’s test, they move over to the side and let the next person take the test until everyone has had one attempt with Soke. After everyone has gone through once, Soke will select the senior Shihan to administer the 2nd chance to the students. Normally at Sunday training, if Nagato Sensei is there, he will be the first one up to give a student the 2nd chance at the test. If that student fails Nagato Sensei’s test, that student is done for the test that day. They may try again another time, but not that day. Nagato Sensei will then give the padded sword to the next senior Shihan (Japanese or Gaijin) to give the 2nd chance to the next student. After that student is done, the next senior Shihan will give the test, and so on until the students are all done. If there are no 15th dan present that day, then only Soke will give the Godan test. He does not normally allow anyone below 15th dan to give the test now. But sometimes he might make an exception. The Godan test is not given if Soke is not present. He makes a very rare exception for Gaijin 15th dan to give the test outside Japan, but these exceptions are few and far between.

Okay, so now you know who and how the test is given. So what does the student do during the test? Some common mistakes made by the student before the test even begins are as follows. Most students are nervous and kneel down too close to Soke. The student must take their time, be calm and kneel down the proper distance away from Soke. Proper distance can be characterized as enough room for Soke to take a good stance (without having to back up) and be able to bring the last 6 inches or so of the sword down on your head. The next mistake is improper posture. I don’t know how many students I have seen hunched over in Seiza posture that ended up failing the test. You must learn to sit up straight, align the spine and crown of the head, and be centered over your heels. If you cannot kneel this way due to injury or physical defect, it is okay to sit in Zazen posture. Again, you must sit with a straight spine and crown. The next common mistake is not relaxing or letting go. You must be willing to fail the test in order to pass it. Only by dropping your ego will you be able to sense the Sakki and avoid the sword. There is no way to hear it or out think this test. You simply must feel it coming and move at the proper time.

Okay, so how about during the test. Well, there are only three things that can happen. The student senses the Sakki and moves with impeccable timing and ukemi to avoid the sword. Hurray, that student passes! Or the student flinches and moves too early. Sorry, you fail. The student avoids the cut, but before the proper time. The sword may not have even moved! This is normally due to not letting go of ego and worrying about failing the test. Soke may let you have a “do over” or he may say that was your 1st chance and give you one more try. Normally you only get 2 chances, but it is entirely up to Soke. The final thing a student can do is to get hit! Sorry you fail. This can be caused by the students not dropping ego and forcing themselves to try to out think the cut. In some rare cases, I have seen the student actually fail the test on purpose as a result of ego. The other reason is poor ukemi. The student is not able to move out of Seiza or Zazen properly to avoid the sword. This can be remedied with training. Failing the test can be a very valuable lesson in and of itself. If it happens to you, cherish the feeling. Then drop the ego and come back and try it again when it is appropriate.

So what about the story you ask? Okay, I’ve set the stage for you. Only two students wanted to take the Godan test that day. The first one knelt down and crowded Soke. We asked this student to move forward. The student could not relax or let go and failed the test by moving too soon. Soke let the person have another try and he ended up whacking them on the head. The second person did pretty much the same thing. Soke sat down and let Nagato Sensei administer the 2nd chance to both students. As the first one was getting ready, Soke asked how long the student had been training. The student said 4 years. Soke said that was too soon and the student would not pass. Sure enough, Nagato Sensei whacked the student on the head. The second student got up and Soke asked how long had he been training. 4 years was the reply and again Soke said, too soon and the student failed the 2nd chance. Soke then said, 4 years is not long enough training time to be ready to take the Godan test, especially for someone who lives in a foreign country. Soke said a proper amount of time would be more like 6-8 years or longer. He went on to say there are always exceptions, like if the student lived in Japan and trained all the time in the Hombu and with good Shihan. Another exception would be if the student had been in combat or real life threatening situations (such as a police officer might experience). Soke said the time for quick advancement in the Bujinkan is over. There was a need in years past to promote students, especially international ones, in a quick fashion. The Bujinkan is okay now and there is no need to do that any longer. Rank should not be held up for good students, as some disreputable and former Bujinkan Shihan have done in the past, but neither should it be so quick. Soke encourages all Shihan to visit Japan for training at least once per year in order to understand this.

So, bottom line is, don’t be in a hurry!

(Author’s note: The general time in grade guideline I use in the BTSD for rank is: 2-3 years for Shodan, and then 1-2 years for each subsequent dan grade. This depends on how often you train with me, or a senior in the BTSD, and how often you come to Japan (in the past how often you went to a TaiKai was a factor, but Soke does not do TK outside of Japan anymore). So a very dedicated student who comes to Japan a couple of times over the years would be taking the Godan test at about the 6 year mark (or maybe a little less). A student who doesn’t train as often and/or doesn’t come to Japan often may take 10 or more years to get to the Godan stage. Also for now, all students must go to Japan to take the Godan test as Soke is not traveling outside of Japan anymore and its rare when he allows one of the 15th dan to give the test outside of Japan. It is done (rarely) but only for extenuating circumstances.)