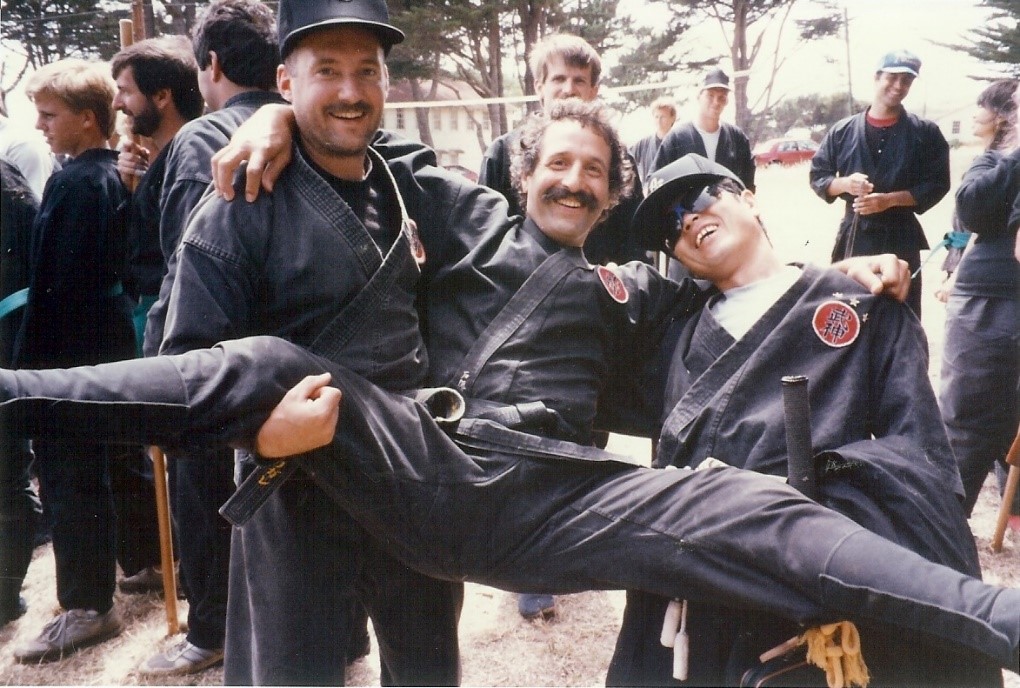 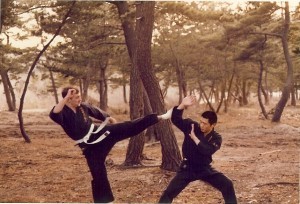 A few weeks ago I wrote an article about proper punching and made a reference to kicks as also being maligned by outsiders. No doubt about it, Bujinkan kicks are extremely powerful kicks when done properly. We have all taken a well-placed heel stomp kick to the torso that took the wind out of us. However, I believe the heel stomp kick or Zempo Geri may be the most misunderstood of all of our Bujinkan kicks. When I first learned how to do a heel stomp kick back in the 70s, I was training with Shoen Fukuda Sensei, in Chugoku Kukenpo. As I have said before, I didn’t realize he was also a Shidoshi in the Bujinkan and also trained me in a number of the Bujinkan ryu-ha until Hatsumi Soke told me years later (after Fukuda Sensei’s passing). The kicks I learned then, including the actual Bujinkan heel stomp, were fluid and fast and could be pulled back for a 2nd kick, driven through the opponent or put down into a forward step.

Fast forward 5 years and I am in Florida training in one of the very first Bujinkan dojo in America. It was there that I was introduced to the “secret ninja kick”, which looked a bit like the heel stomp kick that I already knew. However, the differences were that I was being taught to curve my spine forward, stick out my chin and try to make my shoulder touch my knee before driving the foot forward. This was really foreign to me, but it was explained that we did it this way in the Bujinkan so we could kick someone really close. And it was a secret. This was the most awkward movement in martial arts I had ever learned. There was only one way to go at the end of that kick, fall forward. Some of the detractors of this form were: it put the torso and head forward of their natural position, restricting both movement, vision and breath. You lost power because the hips were not allowed to open up in the leg extension (if you kept the torso in its down position. The balance was compromised so much you had to sink your weigh way down on the supporting leg to keep from falling over. 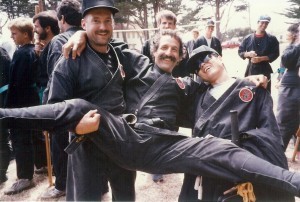 Doron, Ogiri, and Phil at the 1989 San Fransisco TaiKai

A year or so after I started training at this dojo, I was privileged to train with Shihan Doron Navon from Israel. Doron was one of the very first westerners/gaijin to train in the Bujinkan with Hatsumi Soke. According to Doron, he started training with Soke in Japan six years before the “Western World’s Foremost Authority” made his first trip to Japan for training. Doron lived in Japan for a number of years, first studying Judo and then switching over to the Bujinkan in the late 60s. Doron was Soke’s translator in those days, a Shihan and also big into Feldenkrais (Awareness through Movement). In my opinion, Feldenkrais defined his movement as much as the Bujinkan did. I had seen him with Soke at the 82 Ninja Festival, but never got to actually train with him up until this point. He laughed when he saw my heel stomp kick, knowing exactly who had taught it to me. I became his student in ’85 and (among many other things) he taught me the correct posture for the heel stomp kick. In many ways, he basically took me back to my days of training with Fukuda Sensei.

In my opinion the key points for a proper heel stomp kick are:

What I look for when I watch students kicking are similar to what I look for in a proper punch: Good external body alignment to the target, not leaning forward, no head tilt. The joints are in proper alignment (hips open). The arms, legs and head are in play on the movement (no lost arm hanging down). Balanced and committed to the attack (eyes forward). The kick comes out naturally, in a straight line and powerful, but not over-committed. The breath is normal.

Consider the above when practicing your kicks. Use a partner or a mirror to provide feedback on your alignment and the straightness of your kicks. The more you practice this relaxed form of kicking the more flexibility you will create in your hips. The more flexibility, the higher/closer to the torso you’ll be able to get your kicking knee without compromising your balance, vision or breath.

Check out our member website videos to see proper striking techniques. Pay particular attention to Noguchi Sensei’s balance and body alignment when he demonstrates the Kihon Happo. He has perfect posture no matter what he is doing. We should all strive to move as he does. Good luck in your training and let me know how you are doing.